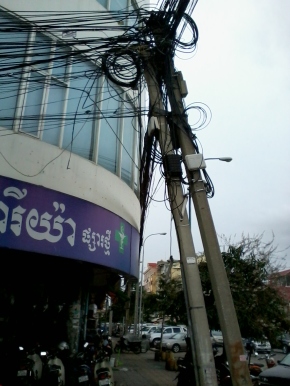 Innovation is not a new thing. My dad invented it. And sustainable energy.

The neighbours used to call him “Nutty Nev” whenever he stood next to his wind generator, which stood probably 100 metres tall in the back yard and didn’t move much. They called him that from over the fence, because he was 6’5’’ and occasionally driven to loudly sing Mary Hopkins tunes. Nature has its warnings.

Among his other projects was a marine-board fishing boat that did work, and a pool table made of masonite, which stood on its side in the garage until nature took its course. In the end, it warped to such an extent that the cue ball wouldn’t go anywhere near the bottom right-hand pocket without a harness and a sturdy pair of boots.

But some of his enterprising spirit must have rubbed off.

A few years ago outside our villa in Abu Dhabi, our only set of car keys made a plonky sound. That was preceded by a scrapey sound as they fell through the slits of the stormwater drain. They would, we were told, cost thousands of dirhams to replace.

It was a chance for the son to measure himself against the ultimate standard – his father.

A visit to several local toy shops in search of magnets yielded zip. But about five minutes up the road was an “electronics shop”, which was really a dingy, grimy charnel house for car radios and carburetors.

A small pair of speakers were bought, taken home and stripped of their magnets. After an impassioned, “greater good” speech, a new pair of stockings were surrendered, and the magnets dropped in. About four metres of fishing line finished the rig.

Now, a middle-aged man sitting on a kerb jiggling a fishing line into a drain was always going to attract some attention. And so it did.

After about 30 minutes, “Mahmoud”, an Emirati who lived across the road, could take it no more.

“What are you doing?”

“I’m trying to fish out the car keys.”

“This will never work.”

But of course, despite knowing the impossibility of the task, Mahmoud – in dazzling white kandura and ghutra – sat down on the kerb. He had to have a go. He was compelled. In such a situation, most men are.  (It probably goes a long way to explaining the gap in longevity between the genders.)

And he was dead right. It didn’t work.

But he knew a locksmith who could fix us up with a new key for the highly unfashionable Hyundai Matrix (the designer of which now hopefully buys his pharmaceutical needs from a chemist IN A SHOP) for a fraction of the price.

He gave the man a call and insisted I wait with him at his family’s villa, to enjoy coffee and shisha and meet and chat with his brothers and cousins.

Three hours later, the locksmith arrived and soon we had a set of keys, but not before Mahmoud had persuaded him to drop the price even further.

We ended up paying 10 per cent of the quote, with another two keys thrown in for free.

It was, I believe, another win for the innovators.

6 responses to “Same same, but innovative”