Happiness is a warm plug 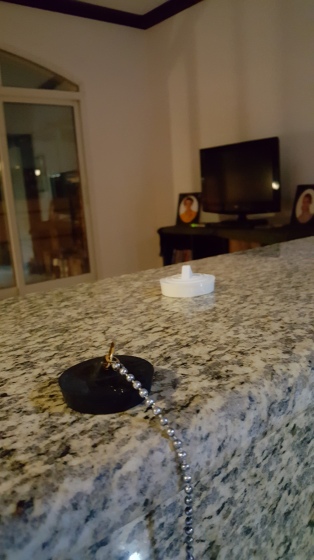 The endearing black chap with the smart chain, pictured, is Happiness. Say hello.

That surly-looking white thing in the background is Not Happiness.

Happiness was found after a months-long search across Abu Dhabi when it was discovered that the former tenants of this flat had taken whatever happiness they had with them. And three months without a hot bath cannot be considered a happy time.

After a long, fruitless search, I finally found him in a small shop on Fatima bint Mubarak Street. (Yes, him. Bath plugs are harder to sex than newborn chicks, but I would hardly subject a she-plug to such unfortunate views. Happiness seems quite comfortable).

The salesmen at the “sanitary products shop”, as they call bathroom equipment stores in this neck of the woods, did not appreciate the Happiness they had in their possession. And I counted five of them through the glass-topped counter. There were probably a few more out the back.

I had no intention of placing a dollar, sorry dirham, value on him, but the Dh10 asked seemed a bit steep, as I told the salesman, especially as the accompanying sink filter was not required. True Happiness can never be strained.

With that, he painstakingly attached a small chain in a fairly pathetic, over-prolonged attempt at adding value. Then, for reasons known only to him, he attached a bolt to the other end.

I took Happiness home. He sat perfectly in his hole, holding back the tides, and continued to do so for four chapters of a John Grisham novel and a glass of cheap Chilean red.

Happiness found a home; a home found Happiness. Despite the bolt and chain having rusted after their first immersion.

He will continue to ply his trade until he starts to show signs of aspirational disappointment. Then I’ll find him a new job, with more responsibilities. I owe him that much.

Not Happiness, an earlier purchase that appropriately did come with a strainer but was too fat-headed to do the job, now petulantly sits in the bathroom watching the successful applicant at work. Sadly, I believe he will never fit in.

I explained this predicament to a colleague when I still held hope that Not Happiness could find a hole of his own in life.

My colleague took on a haughty air and dismissively bellowed that this tendency to “apply human emotions to the inanimate” was an extreme sign of separation anxiety after my family had moved back to Australia. Anxiety, huh? So little he knows.

I sleep perfectly well. Especially now that my flip-flops have forged an uneasy peace with the Hush Puppies.

Sock envy is a terrible thing.